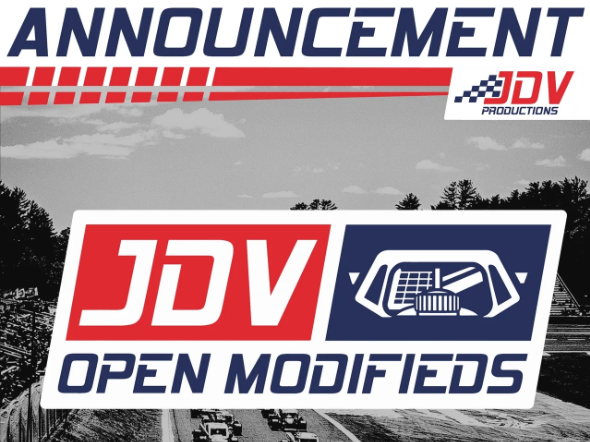 ATTLEBORO, Mass. – JDV Productions announced today two additional events for their 2023 schedule, as the organization will branch out to promote two Open Modified events for the new season. The JDV Open Modifieds will compete in a 100-lap event at Monadnock Speedway on Saturday, June 3 and a 100-lap race at Claremont Motorsports Park on Sunday, September 3.

The Open Modified division will highlight some of the top Modified drivers in New England up against many local house division drivers from the respective New Hampshire short-tracks, who normally compete in the NHSTRA Modifieds.

Among the first two teams to show verbal commitments to competing in the events are former NASCAR New Hampshire state champion Brian Robie and Open Modified team owner Stan Mertz, who will also have his car compete in select NASCAR Whelen Modified Tour events in 2023.

“We feel it’s the right time to branch out into the Open Modifieds and give ourselves a bit more involvement in a thrilling Modified environment in New England,” Josh Vanada, owner of JDV Productions, said. “On top of our scheduled NASCAR Whelen Modified Tour events, we will showcase the Open Modifieds to race fans, with a bit of a local flavor. We’re looking forward to announcing additional details about our 2023 season soon prior to the holiday season. Stay tuned, race fans.”

Robie is no stranger to running at the front of the field at both Monadnock and Claremont and is excited to have some races in his backyard.

“We’ve enjoyed spending the last few years traveling around New England and will continue to do so, but it’s always nice to have a few Open Modified races close to home,” Robie said. “Having two of them is even better. The management team involved with JDV is looking to do things a little bit different, which is always welcome. I enjoy new challenges. Having these shows on our home turf offers a slight advantage. We will be looking forward to running these events in 2023.”

Mertz is also excited to get to the track to compete in these JDV Productions special events.

“We’ve made a living out of Open Modified races in the last few years and competing in a few promoted by Josh Vanada and the JDV team was a no brainer for us when we heard about it,” Mertz said. “We have yet to set a driver for these events, but we have had success at both tracks before and look forward to supporting these races next season. On top of our select Whelen Modified Tour races, we are going to have a busy calendar with our team.”

JDV Productions is excited to announce additional details about the 2023 schedule prior to the end of the 2022 calendar year. Stay tuned to the JDV Productions social media channels for more information.

For more information on JDV Productions, visit JDVProductions.com and follow on social media during the offseason for the latest news and updates.